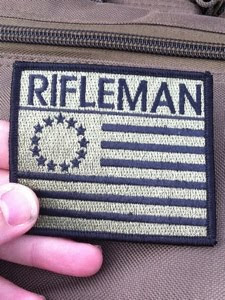 Several years ago my Dad was reading about Project Appleseed. He told me they are a group that does marksmanship training around the US. You just take a .22 and they teach you how to shoot it better. After months of discussing this I got the two of us tickets for a class on Father’s Day weekend in 2010. Like many others (I assume) I thought I was already a good shooter and this would be just a recap of things I already learned. NOT TRUE! I was amazed what I learned. After picking up what I could we agreed that we would do it again someday. I believe the best score I shot all weekend was a 180.
About a year later we got signed up for another Appleseed. Dad had been practicing off and on since the year before, easy when the range is your back yard. I was a little less optimistic that I could score the 210+ also know as a Rifleman score. After the first day I was starting to remember things and was working on getting my scores up but it really seemed like I wasn’t doing it right. My scores were worse than a year before. Finally on the start of the second day Dad scored a 221 and got his Rifleman patch. Now the pressure was on. I wasn’t about to leave without mine too.
Again on the second day I struggled. I was completely at a loss for what my problem was. First AQT (Army Qualification Test) I scored a miserable 100. I started thinking trigger control watch the front sight, breathe, etc...But I was only able to raise it to a 130. By this time I had 2 instructors watching me trying to figure out what was going on, they couldn’t see anything obvious, only a few minor adjustments. We break for lunch, by this time I am ready to call it a day and come back next time. But I stick it out and give it one more go. The first AQT of the afternoon I am setting up, and finally I realize that all this time when I thought I was getting my NPOA (natural point of aim) I was just getting close and then using muscles to adjust the sights on target. I caught this by noticing that after a shot that I muscled from left to right the shot would inevitably go back to the left. After a little bit of adjustment I noticed if I got my NPOA, meaning I could just lay there with sights on the target and even with a stiff breeze not move off the target, surprise shots went where I wanted them to. I figured this out towards the beginning of the AQT. After this massive revelation I shot a 206 (just short). The next round was all mine! 211, with a nice 49/50 on the 400yd targets.
I now have to decide if I want to be an instructor in training....hmmm, it is a big commitment.
Posted by Greg at 7:16 PM