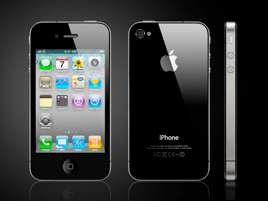 I have long been an iPhone owner, got the original on launch day and have loved it every step of the way. I upgraded to the 3G when it released and to the 3GS when it released. So it was really no surprise when I opted to upgrade to the 4. This time I did something a little different. I upgraded both iPhones instead of just passing down my 3GS. I figured with the killer feature being FaceTime it would be silly to only have one. Almost like getting a single walkie-talkie.

The Purchase
As with previous years (minus the first) I didn’t pre-order or stand in line to get the upgraded phone. I chose to wait for everyone else to tell me if it was worth it. Low and behold one friend said it was. So I called the Apple store and had me placed on a list for 2 of them. It took only about a week before I was notified I could go pick it up. The only down side to this was the drive to Des Moines, but it happened to arrive on my way back home so that worked out well. As a typical Apple Store purchase goes, they let me open the box and they activated it for me.
Initial Thoughts
Now as I first held the phone I thought ‘this is really weird.’ The lines are so different from previous models it felt foreign. But it also felt very solid compared to the older versions. The phone is gorgeous, I never liked the black backs of the 3G & 3GS I always preferred the look of the original until now. This was by far the best looking of the phones they have made.
Using the Phone
The phone is very much like the others. I do find it a little slick due to the glass front and back. iOS 4 is nice but not exclusive to the iPhone 4. Multi-tasking can be both good and bad. Sometimes TomTom app continues to provide route directions even after I closed it intending to completely close instead of just background it. The supposed “antenna” issue that got most of the press is really a non-issue. Yes I was able to replicate it but actually held it in a position different from what I typically do. I was never able to get it to drop a call. If I would have I wouldn’t have know if it was AT&Ts service or the phone.
FaceTime
Now for the ‘killer app’. FaceTime is absolutely worth the upgrade cost if you travel. I have used it a couple times while away from the kids and it beats iChat or Skype, the video quality is much better.
Conclusion
If you can use FaceTime, then it is worth the upgrade, if that doesn’t matter I would stick with the much cheeper 3GS and perhaps wait for iPhone to move to Verizon.
Posted by Greg at 7:08 PM